The Republic of Stellaland, founded in January 1883, issued its first and only set of stamps in February 1884.
Less than two years later, in September 1885, a British expeditionary force under Sir Charles Warren abolished the Republic and formally annexed it to British Bechuanaland. The stamps of Stellaland remained on sale for a few more months before being superseded by the stamps of British Bechuanaland in December 1885.

Surprisingly, despite this short-lived republic being of little consequence, its legacy lives on in a set of five rather unremarkable stamps which seem to have found favour with forgers world-wide.

Presumably, then, it is the simple single colour design, along with the relative scarcity of the genuine stamps that have caused these to be a popular target for forgery.

When genuine stamps are available to compare with, many forgeries are relatively easy to distinguish, as the colour and paper differences are often quite noticeable. Another telltale sign of a forgery is that many are not perforated the 11 ½ to 12 found on the genuine stamps.
If still in doubt, there are eight distinguishing features that may be used to identify a genuine stamps: 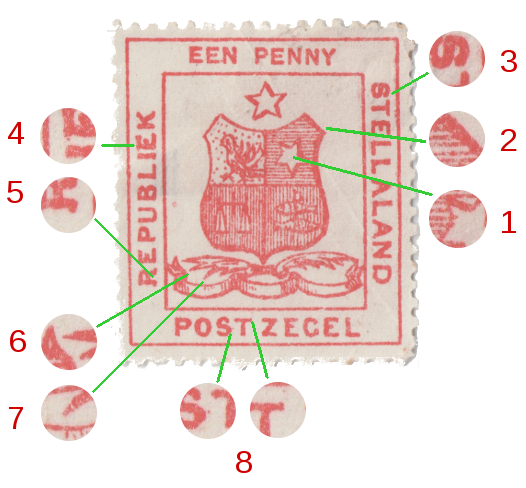 Furthermore, the genuine 1 shilling stamp has another two distinguishing features. Namely a white spot to the left of the central point of the star in the shield, as well as the first letter 'E' of the word EEN being slightly raised with respect to the other letters.

The distinguishing features listed above are of little help when attempting to identify forged stamps produced from one of the original lithograph stones that had somehow been obtained from the printing company.
As the value tablet was not part of the stone, the forgers used the length of the ZES PENCE to determine the size of the value tablets. As a result, except for the sixpence, the value tablets of the other four denominations are shorter than those found on the genuine stamps and can be used to identify these otherwise difficult forgeries.

Stellaland did not possess a cancelling device, instead, stamps were cancelled by hand using pen and ink. The most common cancellation being in the form of the postmaster's initials along with the date. Genuine cancellations are also found with only the date or the stroke of a pen.
Post from Stellaland may also be found with the postmarks of transit or receiving post offices which included Christiana in the Transvaal, and Kimberley or Barkly West in the Cape.